Zadar is Croatian city located in the heart of the Adriatic seashore.

Zadar, Croatia is the urban center of Northern Dalmatia as administrative, economic, cultural and political center of the region with 75,000 inhabitants.

City with exceptional history and rich cultural heritage, a city of tourism.

Zadar combining rich touristic offer with the beauty of the past and as a final result you get all the privileges that the modern traveller demand.

Zadar was created around the Roman forum, a city inside well-kept walls, a city of old Croatian monuments. Full of archieves, museums and libraries, it is the keeper of literary and musical treasure, it is the city inside with the oldest University among Croatians (1396).

It was long ago the place where the first Croatian novel and the first newspapers in the Croatian language were created. It is protected by four guardian saints: Zoilo, Simeon, Grisogone and Anastasia.

During many centuries, Zadar was the home of the Ilyrian Liburni and for 1000 years the capital city of Dalmatia. Rich in history, it is curently a focal point in civilisation, and most of all city with an unquestionable future: its accepted concept of development into an international, Mediterranean and Adriatic metropolis is being realised.

It is a city with a rich Croatian national identity created in the present, wich successfully mixed newest trends of modern times.

What attracts most is irresistible for those who respect and admire historical monuments and cultural heritage, artists, tourists and its citizens.

Zadar is a city monument and it is surrounded by historical ramparts, a treasury of the archaeological and monumental riches of ancient and medieval times, Renaissance and many contemporary architectural achievements such as the first sea organs in the world.

Zadar is a city where huge spaces are left for pedestrians.

Your walk along the cobblestone streets of the city will become a walk through the past, and also an experience of the contemporary life of the city.

Try to take a break in one of many Zadars restaurants, pastry shops or coffee shops that you can find it almost everywhere in town. You may also enjoy listening to the concerts, visit the theatre, museums, and exhibitions.

Zadar, Croatia – Things to od and places to visit

Shoreline is particularly indented, the islands and the untouched nature tempting by many boaters to North Dalmatia region.

Also it is a great starting point if you are planning to visit one of the five national parks – Paklenica, Plitvice lakes, Kornati Islands, Krka and North Velebit.

All of this classifying Zadar and its surroundings as a premium Croatian tourist offer.

Sea Organs are located near the new cruiser port, as a part of Zadar´s Riva, and can be observed as a differently shaped part of the coast which consists of several stairs that immers into the sea.

Sea Organs extending for about 70 meters along the coast, under them, at the lowest sea-tide level, 35 pipes of different lenght, diameter and curvature were built in vertically to the coast and they raise aslant until the paved part of the shore and end in a canal (a service corridor).

On the pipes there are mouthpiece, which play 7 chords of 5 tones. Above the canal there are perforated stone stairs through which the sound comes out, the air pushed by the sea.

Forum – Made in front of the church of St. Donat and the Archbishop’s Palace.

Forum is a municipal square from the Roman era, built from the 1st century BC to the 3rd century AD, 45 by 90 metres in size, representing a very developed example of the forum complex, and it is one of the most important among the Adriatic ancient cities. A stone inscription with the name of Augustus’ proconsul for Illyricum, Tamfil Vaale, carved on the well of the Forum, testifies that the complex construction was started as early as the second decade of the 1st century BC.

The Greeting to the Sun

The Greeting to the Sun – artistic installation which consists of three hundred multi-layered glass plates placed on the same level with the stone-paved waterfront in the circle shape and 22-meter in diameter.

Below the glass conduction plates there are photo-voltage solar modules through which symbolic communication with nature is made, with the intention to communicate with light, somthing like the Sea Organs do with sound.

Harmonized with the „most beautiful sunset in the world” the lighting elements installed in a circle turn on, and, following a particularly programmed scenario, they produce a marvelous, exceptionally impressive show of light in the rhythm of the waves and the sounds of the Sea organs.

Arsenal – old warehouse building originally made in the 18th century to service the naval fleet that protected the Venetian Republic´s valuable trade routes, today the Arsenal has become a hot spot for of art and entertainment. It has embraced the Mediterranean lifestyle bringing together elements of history , music, art , food and wine.

The Cathedral of St. Anastasia

The Cathedral of St. Anastasia – origins date back to a Christian basilica built in the 4th and 5th centuries, while much of the currently standing building was reconstructed in the Romanesque style during the 12th and 13th centuries.

The Cathedral has been submitted to UNESCO’s Tentative List of World Heritage. 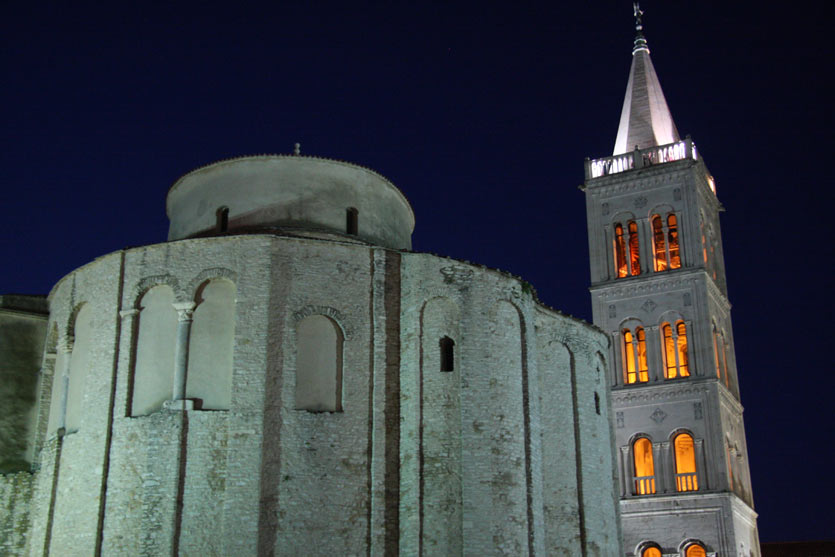 St Donatus’ Church – a sacral monumental round building dates back to the 9th century in pre-Romanesque style, traditionally but erroneously said to have been erected on the place of a temple of Juno. St Donatus’ Church is the one of the most important preserved structure of its period in Dalmatia; the massive dome of the rotunda is surrounded by a vaulted gallery in two stories which also extends around the three apses to the east.

Church treasury contains some of the finest Dalmatian metalwork; significantly the pastoral staff of Bishop Valaresso.

July and August are the hottest months, with an average high temperature around 30 °C.

The highest temperature ever measured was 36.1 °C in August. Temperatures can consistently reach over 30 °C during the summer months, but during spring and autumn may also may reach 30 °C almost every year.

Temperatures below zero are extremely rare, and are not sustaind for more than a couple days. 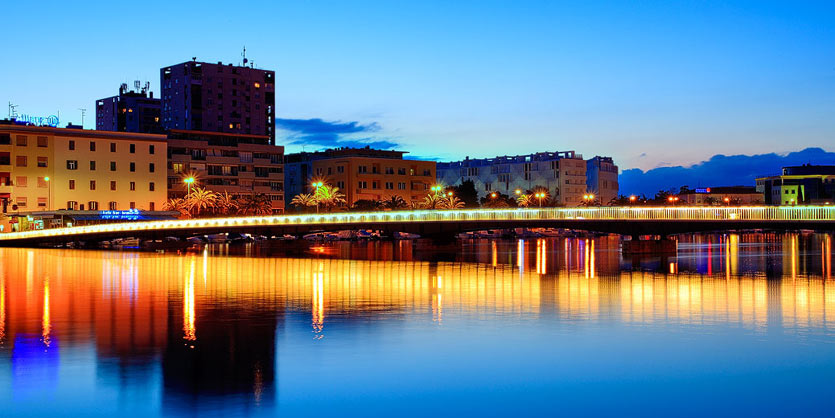 How To Reach Zadar Croatia ?

Zadar is quite easy to reach destination by land, sea or air.

Whichever way you want to reach Zadar, the natural beauty of the landscape will not leave you equanimous.

Zadar ferry port as well as the new tourist cruise port are located on the peninsula itself, and when you entering Zadar on a ferry or boat gives you a marvelous view of the whole city, making your arrival in Zadar a unique experience.

There are numerous ferry and ship lines which connecting city with ferry ports Preko, Zaglav, Mali Lošinj, Pula and Ancona/Italy.

Zadar Airport – even though the airport is small it is modern look recently, and connects Zadar with bigger cities of the Republic of Croatia and some European capitals. Due to the increased interest for Zadar and increased number of flights Zadar Airport was further expanded in year 2007.

Airport is ready for accepting far more passenger than before.

Since 2008 it has VIP terminal and because of that it becoming desirable airport to many celebrities and wealthy guests who can anonymously visit Croatia with their private airplanes.