National Park Kornati is located in the northern part of Dalmatia, a little bit south from the city Zadar and west from Sibenik.

Even though Croatia is dotted with over a thousand of islands, Kornati are the only ones falling into the category of archipelago. It is the most dense Mediterranean archipelago. It stretches for 13km from northwest to southeast covering 320 square kilometers including the sea belt and 109 islands and islets, from which only 5% are cultivated.

Most noticeable places to visit are Spinuta bay, very photogenic Lavsa Bay, the Purara reserve which is bustling with marine life, Opat peninsula, shallow channel Mala proversa and many other small islets with their specific shape or story.

Most of the islands have not been given any names so when some of the austrian surveyors came during 19th century to make a record of the islands, the local people who toured them through the archipelago gave them vulgar names on the spot such as Grandmas ass and Whore.

Terrain consists mostly out of karst-limestone which arose from sediment in the sea. Waves and winds formed many sort of interesting stone shapes, cliffs, small and large caves.

Most of the area is dry throughout the years because of the winds and porous rocks. Humans are present on these islands throughout the history, mostly for recreational reasons and only during the summer. It served as resupply point for fishing and war fleets during the middle ages.

Most of the vegetation consists of grass, having lost it’s holm oaks, Quercus ilex and other mediterranean trees in the open fires. Mamals are also sparse on Kornati. Most of the animals on Kornati islands are rodents, lizards, insects and birds. 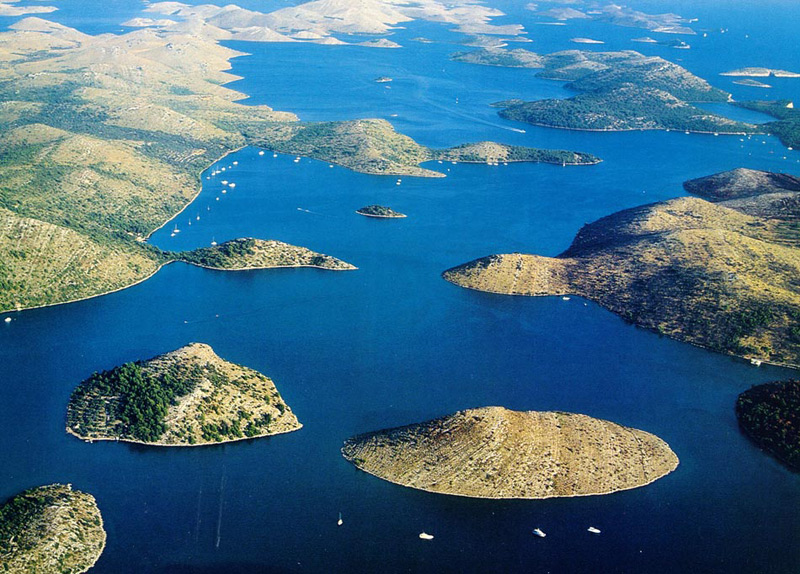 How To Reach Kornati National Park

Easily reachable by boat, this place is ideal for snorkeling and diving. Plenty of interesting underwater terrain will keep you entertained for a long time. Caves, cliffs and underwater fields will make your diving experience truly spectaclar!

You don’t need a license for snorkeling, but if you plan on diving, there are plenty of diving clubs to organize a guide diving groups. You should really not miss out on such opportunity as underwater life and terrain was one of the reasons Kornati National Park became one in the first place.

Plenty of crystal clear beaches and tranquility, hiking and biking paths, dinning in taverns on all sorts of delicious dalmatian specialties is what should make a superb vacation or at least a daily visit.