National Park Mljet is located on the far southeast of Croatia on island Mljet with an area of 53.75 square kilometers that takes up about 1/3rd of west side of the island along with the surrounding sea. The island is of volcanic origin, which attributes to the very interesting topology. The island contains na inland sea which harbors yet another small island within it. It stretches along with largest peninsula in Croatia, Peljesac, which are separated by sea channel.

Because of the presence of craters, on some parts of the island you can find natural mud basins, which fill with water during the winter periods.

More than 84% of island is covered with dense Mediterranean forest with pine and oak trees from the inside and bushes on the outside.

Due to isolation, many animal species roam the island, such as mouflons, deers, wildcats, wild boars and astray domestic goats. Specific location of the island allows many birds species to call this place a home, like blackbird, mutt warbler, sparrow, pigeon, gull and the hawk.

The sea around the shore is saltier and warmer than on the north part of Adriatic sea. Strong winds, currents and waves formed sandy beaches, caves and many small natural harbors. The park also contains few other small islands on the north side, mainly Pomestak, Galicija, Glavat and Borovac. Pomestak provides a natural barrier to the small harbor of village Pomena. During summer, this place is frequently visited by yachts. 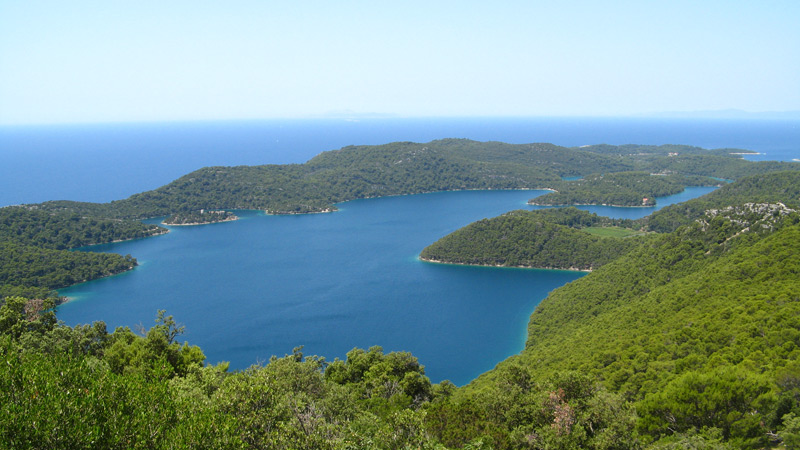 Mljet local population is friendly and outgoing. Most villages (particularly Polena and Polace, located on the north side of the island) have ‘konobas’ (type of snack restaurant with a family friendly enviroment) where you can enjoy local delicacies and quiet atmosphere. Most of the people were fishermen and farmers in the recent times, which is gradually changing. You can still experience the old ways of living if you decide to visit some of the older folks.

You can dive under supervision to nearby Roman shipwreck from 3rd century in shallow waters near the coast, along with sunken German torpedo boat. You can also rent kayaks near the lakes, the water in the lakes is very calm which makes it ideal for family friendly activity. If you decide on exploring the park via land, cycling is a very enjoyable acitivity because you are able to get a good look of entire park and the slopes are not difficult.