Pula, Croatia is one of Istria’s most authentic ancient and complex cities it is also the largest city in Istria County, Croatia, situated at the southern tip of the Istria peninsula, with a population of 62,080.

Like the rest of the region, it is known for its mild climate, smooth sea, and unspoiled nature.

Opposed to many other Istrian destinations, Pula has a thriving life apart from the tourist offer during summer months.

Pula is an important shipbuilding centre, an industry that goes back to the days when it was an important navy harbor under during the reign of Austro-Hungarian empire.

Even the ancient Romans liked Pula’s position and made it their administrative headquarters.

Visitors may want to make Pula their headquarters for their Croatian holiday. Pula also has a long tradition of winemaking, fishing, shipbuilding, and tourism.

Well preserved natural beauty of Pula’s surrounding countryside and turquoise water of the Adriatic sea have made the city an internationally popular summer vacation destination.

The pearl nearby is Brijuni national park visited by numerous world leaders since it was the summer residence of Josip Broz Tito.

Roman villas and temples still lie buried among farm fields and along the shoreline of the dozens of surrounding fishing and farming villages.

When locals seeks fun and entertainment they usualy goes to Verudela peninsula which is a few kilometers away from the city center.

All tourist attraction of Pula hotels, restaurants or nightspots are scattered across the Verudela peninsula.

There’s not a much happenings in the town centre unless there’s an event at the Pula amphitheatre.

Due to turbulent political history, Pula is a city with a cultural mixture of people and languages from the Mediterranean and Central Europe, ancient and contemporary what is noticeable on Pula’s architecture which reflects these layers of history.

In period from 1904 to 1905 Irish writer James Joyce taught English at the Berlitz School.

Students were mainly Austro-Hungarian navy officers who were stationed at the Naval Shipyard.

In that period while he was in Pula he organised the local printing of his broadsheet The Holy Office, which satirised both William Butler Yeats and George William Russell.

Pula, Croatia – Things to do & places to visit

Augustan Forum (Pula Arena) – was constructed in the 1st century BC, close to the sea.

In Roman times it was surrounded by temples of Jupiter, Juno and Minerva.

This Roman commercial and administrative centre of the city remained the main square of classical and medieval Pula.

It still is the main administrative and legislative centre of the city.

The temple of Roma and Augustus is still preserved today.

A part of the back wall of the temple of Juno was integrated into the Communal Palace in the 13th century.

St. Mary Formosa – Byzantine chapel which was built in the 6th century in the form of a Greek cross, resembling the churches in Ravenna.

It was built by deacon Maximilian, who became later Archbishop of Ravenna.

Along with another chapel, part of a Benedictine abbey that was demolished in the 16th century.

Despite big destructions through history, floors and the walls are still decorated with 6th-century mosaics.

The decoration bears some resemblance to the Mausoleum of Galla Placidia at Ravenna. The wall over the door contains a Byzantine carved stone panel.

The 15th-century wall paintings may be restorations of Early Christian paintings.

The Venetians they removed many treasures from this chapel to Venice in the year 1605 when they raided Pula, including the four columns of oriental alabaster that stand behind the high altar of St Mark’s Basilica.

Church of St. Francis – built in 1314 in late Romanesque style with Gothic additions such as the rose window.

The church consists of a single nave with three apses. An unusual feature of this church is the double pulpit, with one part projecting into the street.

A 15th-century wooden polyptych from an Emilian artist adorns the altar. The church’s west portal is decorated with shell motifs and a rose window.

The adjoining monastery dates from the 14th century. Church of St. Francis is peculiar example of cloisters display some antique Roman artefacts.

Cathedral of the Assumption of the Blessed Virgin Mary

Cathedral of the Assumption of the Blessed Virgin Mary – dates back in the 6th century, when Pula became the seat of a bishopry, over the remains over the original site where the Christians used to gather and pray in Roman times.

Cathedral was expanded in the 10th century. After its destruction by Genoese and Venetian raids, it was almost completely renewed in the 15th century.

Current appearance dates back in early 16th century when a late Renaissance façade was added. The church still retains several Romanesque and Byzantine characters, such as some parts of the walls (dating from the 4th century), a few of the original column capitals and the upper windows of the nave.

In the altar area and in the room to the south one can still see fragments of 5th- or 6th-century floor mosaics with memorial inscriptions from worshippers who paid for the mosaics.

The windows of the aisles underwent reconstruction in Gothic style after a fire in 1242.

The belfry in front the church was built between 1671 and 1707 with stones form the amphitheatre.

There also used to stand a baptistery from the 5th century in front of the church, but it was demolished in 1885.

Orthodox Church of St. Nicholas – with its Ravenna-style polygonal apse, originally dates from the 6th century, but was partially rebuilt in the 10th century.

In 1583 it was assigned to the Orthodox community of Pula, mainly immigrants from Cyprus and Nauplion.

The church owns several icons from the 15th and the 16th century and an iconostasis from the Greek artists Tomios Batos from the 18th century. 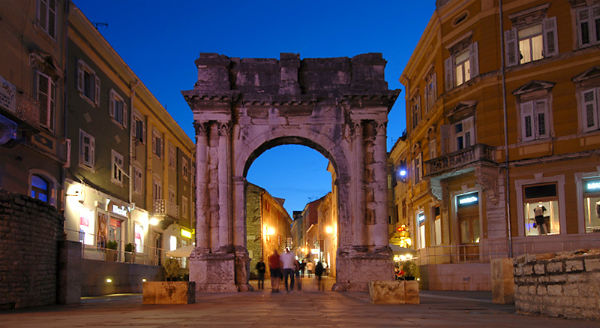 Hercules Gate – dates from the 1st century. On the top of the single arch one can see the bearded head of Hercules, carved in high-relief, and his club on the adjoining voussoir. A damaged inscription, close to the club, contains the names of Lucius Calpurnius Piso and Gaius Cassius Longinus who were entrusted by the Roman senate to found a colony at the site of Pula. So, it can be deduced that Pula was founded between 47 and 44 BC.

Archaeological Museum of Istria – located in the park on a lower level than the Roman theatre and close to the Twin Gates.

Its collection was started by Marshall Marmont in August 1802 when he collected the stone monuments from the temple of Roma and Augustus.

Today’s museum was opened in 1949 there you can see treasures from Pula and surroundings from prehistory until the Middle Ages.

Aquarium Pula – biggest aquarium in Croatia, located in the Austro-Hungarian fortress Verudela, which was built in 1886 on the peninsula 3 km from the downtown of Pula.

Process of transforming the fortress into the aquarium has been in progress since 2002. The installation encompasses about 60 tanks on the ground floor, the moat, and the first floor of the fortress. On the surface of approximately 2000 m2, visitors can view inhabitants of the Northern and Southern Adriatic Sea, tropical marine and freshwater fish and with representatives of European rivers and lakes.

From the roof of the Verudela fort, visitors may view the entire city of Pula. It is also possible to see the first marine turtle rescue centre in Croatia.

From north side Pula is protected by the mountain chain of Alps as well the inner highland, the climate is Mediterranean, very pleasant, with the highest air temperature averaging 24 °C during August and lowest averaging 6 °C, in January.

Summer months are usually warm during the day and cooler near the evening hours, although some strange heat wave patterns are also common. In the air there is a lot of moisture, temperatures above 10 °C last for more than 240 days a year.

There are two different kinds of winds here – the bura brings cold and clear weather from the north in winter, and the  jugo “south wind” which bringing rain in summer months.  North-West wind ‘Maestral’ is a summer breeze wind blowing from the inland to the sea.

By Air – Pula Airport is located north-east of city center, and serves both domestic and international fight routes. Something like nearby Rijeka Airport, it is not a main international destination.

There are direct flights into Pula airport from London and Dublin during whole year and several other large airports in Western Europe during summer.

By Bus – buses serve Pula from a wide range of local, domestic and international lines and operate from the large bus terminal on the edge of the city centre. Public bus transpotation is run by Pulapromet. There is also guaranteed one direct line from Pula to Trieste, especially into warmer seassons of the year.

By Train – service operates north from Pula through to Slovenia, however the line remains disconnected from the rest of the Croatian Railways network. Plans to tunnel the ‘missing link’ between this line and from Rijeka have existed for many years, and despite work commencing on this project previously, has never seen completion.

By Ferry – ferries also operate from the Pula port area to nearby islands, and also to Venice and Trieste in Italy during summer months.

By Bike – city is also known as final point of the EuroVelo 9 cycle route that runs from Gdansk on the Baltic Sea through Poland, the Czech Republic, Austria, Slovenia and Croatia.