Plitvice National Park are the most visited national park in Croatia, as well as one of the most famous in Europe, and are included into the most beautiful attractions of the world. The first thing that you will notice when you visit the Plitvice lakes for the first time are the luxury and abundance of water, the sounds coming from the waterfalls, the power and force of nature in all its glory.

The Plitvice Lakes are constituted of 16 lakes, composed in a cascade manner, linked to each other by waterfalls, while a kilometre long network of wooden bridges and forest trails enables a close contact between visitors and waterfalls and lakes.

The nature creating waterfalls on its own, forests, plants of the national park, as well as the living world inside the lakes and beside them, are the reason for the thrill experienced by thousands of people every year.

Barriers between the lakes, over which amazing waterfalls and slopes fall, are created in a special, natural, ongoing way for thousands of years now. 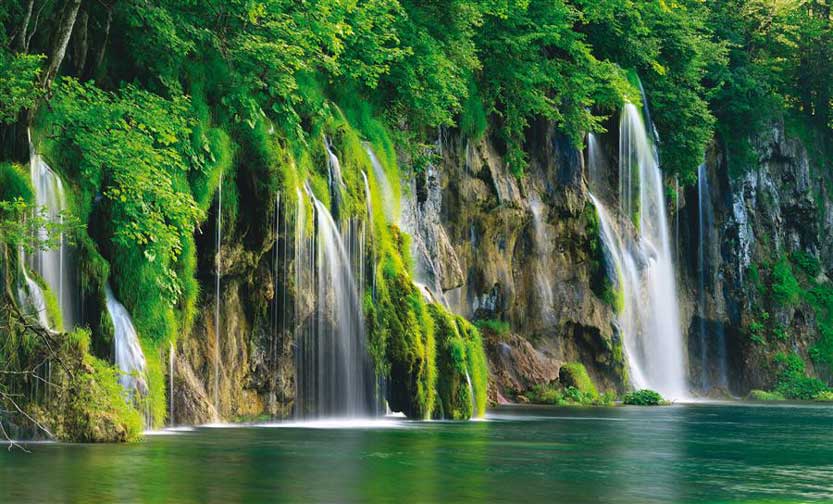 As a final result of sedimentation of calcium carbonate, natural barriers are created on the bottom of the lake, as well as on top of submersed objects,constantly growing in height and width, thus creating spectacular waterfalls. Great diversity and variety of natural shapes have led to the fact that the National park Plitvice has been included into the UNESCO’s “World heritage list”.

This constant changing makes the Plitvice Lakes never look the same. The best way to actually see this happening is when you are standing in front of the Great falls, 78 meters high, The roaring thunder of the water as it hits the ground is unforgettable!

In National Park Plitvice lakes, each season tells its own story with the help of colours, sounds, murmur of the waterfalls, odours, quiet and life. True nature lovers say that you have never seen Plitvice if you haven’t visited it during all four seasons.

Consisting of sixteen lakes in total, there are two parts to the park – the upper lakes, and the lower lakes. The park gives you a couple different options for routes to take based on what you want to see and how long you want to be walking for.

Other way of touring Plitvice is also an electric boat that takes you from one side of the largest lake to the other. This boat runs all year round, more frequently during summer.

Swiming is not allowed anywhere in the Park, because Plitvice Lakes crystal clear water need to be kept that way.

Visiting Plitvice lakes in the middle of winter is a very special and unique adventure. The lakes are mainly frozen and forests are covered with snow, creating a special feeling like you’re in a fairy tale.

78 meter high Grand Waterfall (Veliki Slap) revealing its greatest beauty in a half frozen state, while the lakes followed its uniqueness that shined in daylight. Due to weather conditions, a tour is conducted in smaller groups and only in certain parts of the Plitvice lakes National Park, but the experience of nature is more intense than is during other seasons.